In this post we'll be focusing on a certain kind of malware: Linux/Xor.DDoS (also known as DDoS.XOR or Xorddos). As usual, we'll break the post down in several points:

The variant discussed in this blog post is an older variant, so certain infection mechanisms may have changed, as well as C&C's. The point of this post is to familiarize yourself with ELF malware in a better way - how to diagnose, analyse, remove and finally prevent malware from infecting your Linux machines. A lot of malware is going around and it's not (all) exclusively for Windows machines.

Background
You may have heard about Linux/Xor.DDoS already, a Linux Trojan with rootkit capabilities (belonging to the category of 'ELF malware'). What exactly is an ELF file? According to Wikipedia:

There's a nice mini poster available by Corkami as well:


More information about the ELF format can also be found at the Resources section.

If you haven't heard about Linux/Xor.DDoS itself already, be sure to read the initial post by MalwareMustDie uncovering this malware:
Fuzzy reversing a new China ELF "Linux/XOR.DDoS"

In short: Xor.DDoS is a multi-platform, polymorphic malware for Linux OS and its ultimate goal is to DDoS other machines. The name Xor.DDoS stems from the heavy usage of XOR encryption in both malware and network communication to the C&Cs (command and control servers).

There have been other write-ups about this malware as well, which will be mentioned throughout this article or referenced in the Resources section.

Diagnosis
How do you know you're infected with Xor.DDoS?

First and foremost (and obviously), you'll be conducting DDoS attacks from your machine(s) to targets chosen by the malware authors.

You may use netstat to print any current network/internet connections. Use tcpdump to get a more detailed analysis of which packets you are sending out.


Secondly, another indication is seeing processes running with random names and sudden new executable files created in /etc/init.d/ or /usr/bin/ (see example below). New entries will be/are added to your crontab as well (/etc/crontab).

You may use any command based on top or on ps to check for running malicious processes. We will see more in the Disinfection part of this blog post.

Thirdly, if you are running the standard OpenSSH server you may see an unauthorised but successful login and immediate logout afterwards.


These symptoms should be very clear, even more so if you've already implemented several measures to protect yourself from potential intruders. If not, then it'll be harder to track the infection origin as well. (but more often than not the SSH credentials of the root users are brute forced.)

To ensure your machines will not get pwned, be sure to read the Prevention part of this blog post.

Analysis
First off, we have to identify how the malware entered the system. Usually, a weak root password is used (like admin or 123456, see here for a list of tried passwords. Note: huge .txt file!) or the attackers are brute forcing their way in. (brute forcing the SSH credentials of the root user) Another, but less common possibility, is exploiting a vulnerable service that you have running (Apache for example).

This figure is an excellent visual representation on how it all happens:


This variant copies itself over to /lib/libgcc.so, then creates a copy in /etc/init.d and a symbolic link to /usr/bin. Afterwards a new cron script is created and added to the crontab.

Easiest way on Linux is to just use the "file" command:

Why is that last part important? strip allows you to remove symbols and sections from choosen files, which in turn makes it harder to reverse engineer (disassemble) as well. In this case, the file doesn't seem to be stripped, great! For example, we can see the source files and get an idea of what this malware does:
(this will also be shown later on in the video below, using IDA) 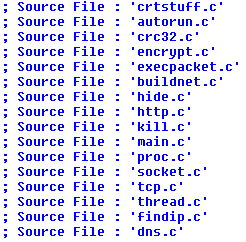 Moving on, we will start by using readelf for some further investigation of the file. We know, thanks to the file command, it's an ELF 32-bit executable for i386. Using readelf and parameter -h we will be able to gather more information: 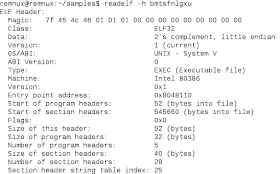 This gives us more information already, for example; the magic (7F 45 4C 46 for ELF files, 4D 5A for MZ files)  2's complement, little endian,  the exact type of the file (an executable; other types for ELF files may be a relocatable file, a shared object, a core file or processor specific) but most importantly here being the Entry point address, or the start of the program.

In regards to readelf, using parameter -a we can dump a ton of information, you can find the output of this command on our malware on Pastebin: Xor.DDoS - "readelf -a" output

Note that VirusTotal has added (since November 2014) detailed ELF information in reports as well, which is more or less similar to readelf's output.


However, to dive a bit deeper into the malware code, we will be using IDA, a multi-processor disassembler and debugger and Radare, a well-known (portable) reversing framework. Note that it will still be a quick glance, as MalwareMustDie has already reported extensively  about it as well [1][2][3][4]. Note also that it's always a good idea to analyse malware in a virtual environment (VM).

We will be using both tools on Windows, but you can just as easily run them on Linux or Mac.

I've made an instruction video on how to use IDA Pro Free to take a quick peek into the file discussed:

... And just the same for Radare, where we will discover a bit more - namely the C&C of the malware:

Note that the Xor.DDoS variant discussed in this blog uses 2 XOR keys for its (network) communication, they are the following:

If you like GUIs, then I have another useful utility: ELFparser. It will perform a scoring based on several factors, such as shell commands, HTTP functionality and process manipulation. For example, for our file:

You can see it's scored pretty highly. I wonder what it has to say about the hardcoded IP addresses..:

Using ELFparser you can also look at the ELF header, sections, but also all of its capabilities like Information Gathering and Network Functions for example. It's a handy second-opinion tool.

Finally, one last tool which should not be missed when analysing ELF files: a sandbox. We will be using detux, a multiplatform Linux sandbox.

You have Network Analysis (IPs connected and DNS queries) and Static Analysis (Elf Info and Strings). In our example we have connections to wangzongfacai.com, not an unfamiliar domain. View the complete report made by Detux on our file here.

It's worth noting that several months ago, I already sent a file to Detux (and VirusTotal) which yielded similar results:

Detux report of that file here. When I sent the latter file to VirusTotal several months ago, it only had 12 detections, after re-submitting it had 19 detections. That's better but we're still not there.

You may find an overview of all gathered files as well as most common/recurring domains and their IPs they connect to/download from here, available via AlienVault's OTX.

That's it for our Analysis section, let's move on to Disinfection.

Disinfection
Most importantly, you'd of course like to remove/disinfect this malware completely. Some pointers:

As said earlier, delete these files manually, as well as the file(s) mentioned in the scripts. (in this case: /lib/libgcc.so.bak, /lib/libgcc.so and /lib/libgcc4.4.so.) Note that these files are not related to GCC's runtime library and thus can be safely deleted. It's just another way how the malware tries to hide itself.

Also double-check there are no malicious files or scripts in /etc/rc.d. If so, remove them as well.

That's it. Some additional tips and tricks:

When you have either of these available, don't forget to change all passwords afterwards to prevent re-infection - and patch your machine(s)!

Some Xor.DDoS variants may also incorporate a rootkit. In that case, hope you have a "best case scenario" available to you. Once a box is fully compromised, it may be hard to reinstate it back to normal or its original state.

For double-checking for rootkits and other malware, you may want to check out chkrootkit or alternatively, rkhunter. Additionally, you may download and install an antivirus, for example ClamAV.

If you perform manual clean-up as indicated above and have confirmed all is in order again, you can install ClamAV and perform an extra scan to be sure. Better be safe than sorry. Then, follow the prevention tips below to stay safe.

Note that this list is not complete and new ELF malware may pop up every day. (it's not a question of if, but when it will pop up) You can find a list of (interesting) Linux malware here.

To conclude this blog post, some acknowledgements and resources/references:

My colleague from Panda France, Julien Gourlaouen for informing me about this incident.

Everyone who helped, helps and will help in battling creators of ELF malware, in particular @MalwareMustDie for their excellent research and increasing awareness about these threats.

Last but not least, thank you for reading my blog post.